This weekend I was up in Seattle for the fabulous NW Folklike festival, which really deserves a post all its own, but probably won’t get one this time around. On Sunday I decided to visit St. Spiridon’s Orthodox Church (OCA) which I had not been to in decades (literally). And I got to hear bells! Beautiful, ringing, real live bells! 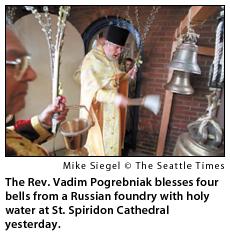 The bell ringer did a beautiful job ringing a pattern similar to what one of the Monks at New Skete refers to as the “Sitka Shuffle” (Many Russian churches in the Lower 48 are populated with descendants of Orthodox in Alaska, Russia’s early entry point to North America). Unlike at New Skete where I am either in the church building which muffles the sound, or frantically trying to keep time as I help the bell ringer while wearing funny ear mufflers, I was actually able to hear and enjoy these bells. They are not big, but they have a beautiful sound. There is just nothing like real bells, that strange combination of clang and clear ring which appears to echo on and on even as the bell is struck again. It is so rare to hear real bells anymore, they are expensive to buy and difficult to play. Sigh. What a loss, but what a treat! It was such an unexpected and beautiful way to end the liturgy.

Note: the “yesterday” in the picture caption actually refers to Sunday, April 23rd, 2000.

Is Jesus human, or male?

On 'This Year's Election': A response regarding Fr. Reardon